Today in talk with Umer Shah 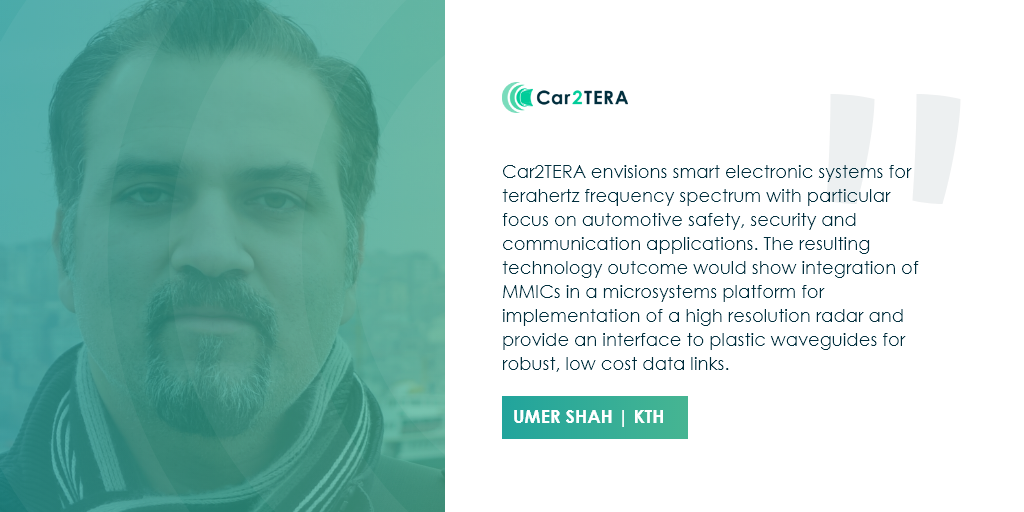 Today in talk with Umer Shah – 5 questions about himself and the Car2TERA H2020 project.

Introduce yourself and tell us a bit about your background?

I received my BS degree in Engineering from GIK Institute Pakistan in 2003, MS degree in Wireless Engineering from the Technical University of Denmark (DTU) in 2007 and PhD degree in Microsystem Technology from KTH Royal Institute of Technology in 2014. Since 2016, I am employed as a Researcher in the Division of Micro and Nanosystems at KTH Royal Institute of Technology. I have authored and co-authored more than 40 reviewed research papers. I am the recipient of the Best Student Paper Award presented at Asia Pacific Microwave Conference 2010, Yokohama, Japan and also the recipient of the “2014 IEEE MTT Graduate Fellowship Award” for my research.

What is your title and/or role in the project?

I am deputy to the scientific lead and in that respect I am mainly responsible for WP4 on “Interfaces and packaging of new technologies into electronic systems” and part of WP3 dealing with the “design and fabrication of MEMS beam-steering/beam-switching antenna front-end prototype”. This role also includes coordination with WP2 to provide integration of the MMICs into the micromachined platforms, coordination with WP7 to deliver a complete integrated microsystem with MEMS-reconfigurable beam-steering front-end for the demonstrator and coordination with WP6 to deliver micromachined integration platform with MMIC to plastic fiber interface.

What are your contributions to the project? (Specify what deliverables and/or tasks you are responsible for)

What challenges can you foresee in the project?

The main challenge is to develop the sub-terahertz beam steering solution that achieves both large angular and range resolution and wide field of view. Radar implementations at sub-terahertz frequencies offers a significant advantage in terms of wide instantaneous bandwidth resulting in a large range resolution but beam squint severely limits the usable bandwidth of the system. Moreover, high angular resolution requires the antenna to have a pencil shaped beam with a narrow beamwidth and a high gain. Now to achieve wide field of view, the antenna beam needs to be steered as well. The implementation of such a system present significant design and fabrication challenges. Another major challenge is the development of the micromachined platform with integrated MMICs and the THz-plastic interface. Such a platform would require development of novel alignment and integration processes.

How do you think the project outcome could affect our daily life?

The impact on the daily life is primarily observed by considering the applications impacted by the outcome of this project. For instance, the primary demonstrator of high resolution, short-range car radar sensor would enable an integrated sub-terahertz radar solution that is intended for in-cabin passenger monitoring but could also be implemented as high resolution around-car radar. The extra information provided to the driver about road conditions and driver alertness could reduce the number of all car crashes. Moreover, road condition, pre-crash impact type and position and in-car passenger monitoring information is also provided to the vehicle control system which can take preventative or corrective actions and implement crash mitigation measures. For the secondary application, THz-over-plastic wired data links could be used for intra base station connections. These currently employ tens of optical fibers which are susceptible to temperature variation, misalignment and add a considerable cost. Data links with THz-over-plastic could have lower weight, power consumption and cost and would enable the expansion of the back-bone and radio-access networks facilitating the data growth through 5G and beyond.

Manage Cookie Consent
To provide the best experiences, we use technologies like cookies to store and/or access device information. Consenting to these technologies will allow us to process data such as browsing behavior or unique IDs on this site. Not consenting or withdrawing consent, may adversely affect certain features and functions.
Manage options Manage services Manage vendors Read more about these purposes
View preferences
{title} {title} {title}